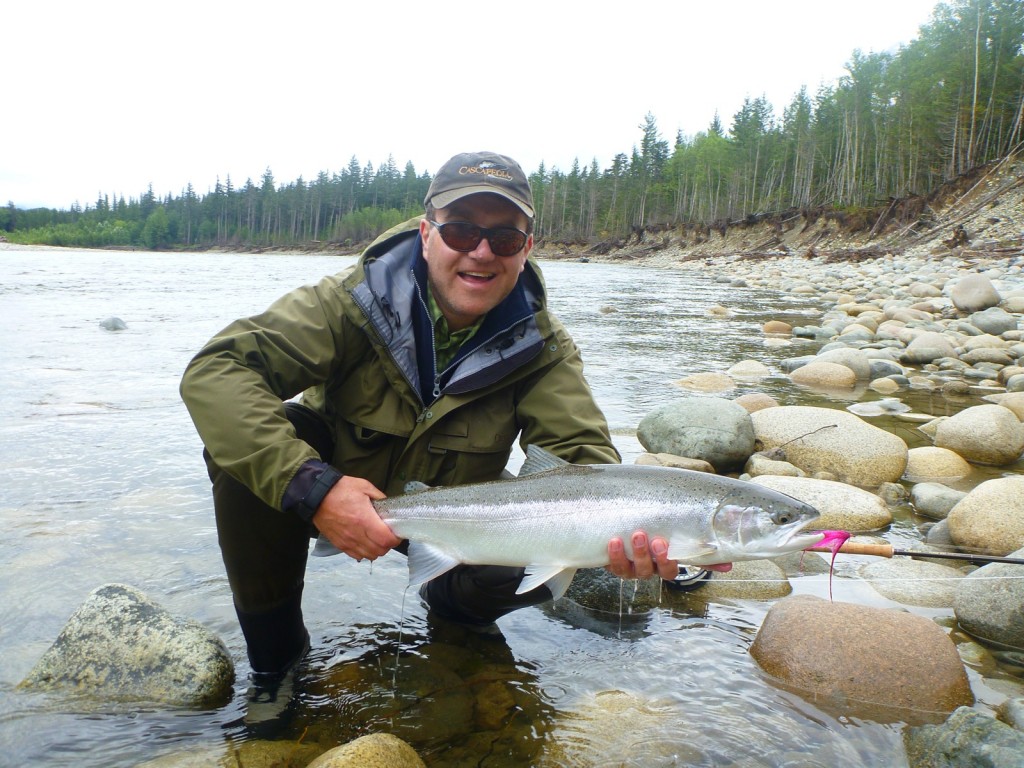 What the Atlantic Salmon (Salmo salar) is today to the flyfishermen and -women of Europe and the East Cost of North America, the Steelhead or anadromous form of the rainbow trout (Oncorhynchus mykiss) is to the Pacific Northwestern flyfishing addicts.

Dean River Steelhead are born in the River Dean in British Columbia in Canada but spend approximately half their lives in the Pacific Ocean. They reenter the Dean River through the Dean Cannel - a 100 km long fjord like inlet of the British Columbia coast - and then have to overcome the Dean River Canyon - a natural barrier located 4.5 km upstream of the Dean Channel. Since the steelhead have to face this canyon to reach their spawning grounds, the Dean River steelhead are strong, aggressive and powerful and the fish of the Lower Dean - the stretch between the saltwater of the Dean Channel and the canyon - are known for their freshness, silver colour and stunning beauty.

It was these legendary gamefish that my friend Martin and I were after during the six days from August 13-18, 2011. We had booked a trip through FlyGal Ventures and Blackwell’s Dean River Lodge. Our guides were April Vokey and Steve Morrow. 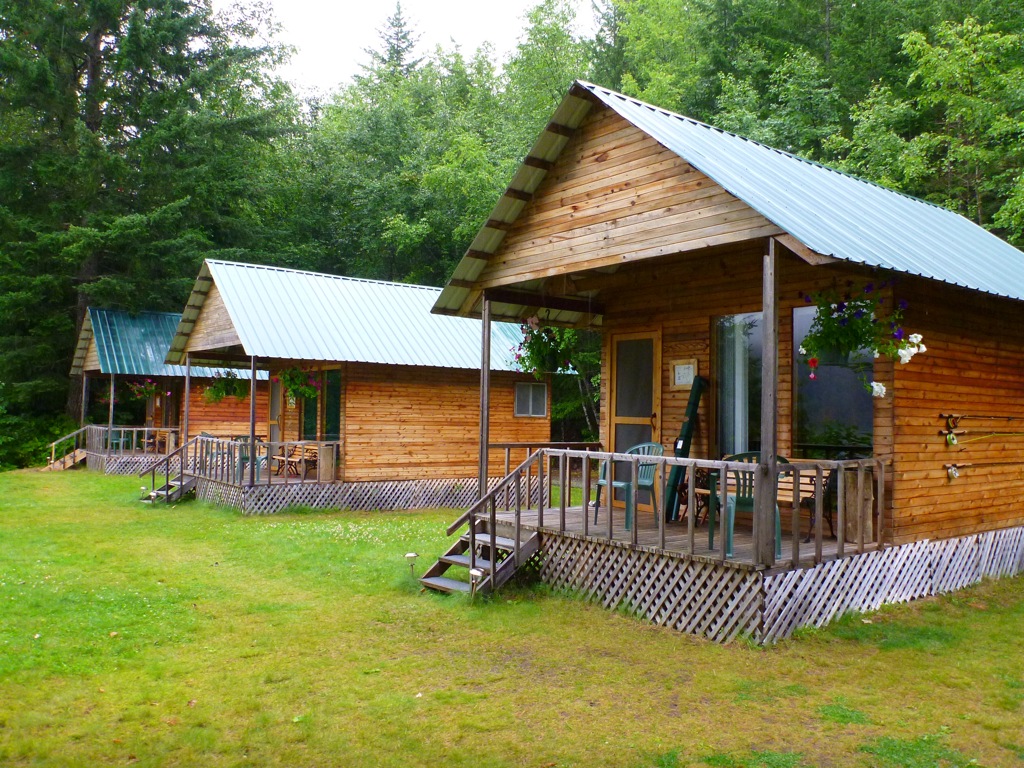 How did we get to this most promising venue? First from Vancouver airport to Moose Lake Lodge by charter airplane, next from Moose Lake Lodge to the Dean by small bush airplane. Before landing in the Dean Channel, we flew over the majestic Dean River and could see the pools and stretches in the lower part that we were about to fish and that became our second home in the upcoming days: Cedar Hole, Eagle’s Nest, Upper Tidal, Bill’s, Instant Backing, Cutbank, Archeological, Ross’ Island, Slide, Boat Launch Island. Snow covered peaks, scenic Grantham Falls and quiet Dean Channel were always our marks.

But now let’s get to the fishing. Our boatman and guide Steve and our guide April took very good care of us. Their intimate knowledge of the water and beats we fished as well as their technical expertise were essential during our stay. We were five flyfishermen and both guides got us started and guided us every day on the different beats.

Right on the first day, Martin and I had to realise that our preparation regarding Spey casting was insufficient. Although we had practiced Spey casting a lot before this trip, we simply were not prepared to cast heavy sink tips (T-11 and T-14) together with large and heavy intruder flies. So this was indeed a shock on the first day. But we were able to learn fast, adapt and improve our strokes and cover the distances needed to place a fly in front of a much sought after steelhead. On the first day we thus landed some pink salmon and an occasional Coho salmon.

One of the most hilarious episodes of the trip took place right on the first day at our lunch break. During our picnic at Ross’ Island, Steve, one of the other participants in this week, pointed out to our guides April and Steve that there was a bear behind them. Yes, good joke, very funny. But as everybody turned around, we noticed a black bear and its cub at around 15 meters behind us. They quickly disappeared after our guides scared them off. This reminded us that we were in bear country. Every day we saw many fresh bear tracks in almost every beat and were always aware that we were being watched. Luckily no other close encounter took place. On the other hand bald eagles were almost always in sight. 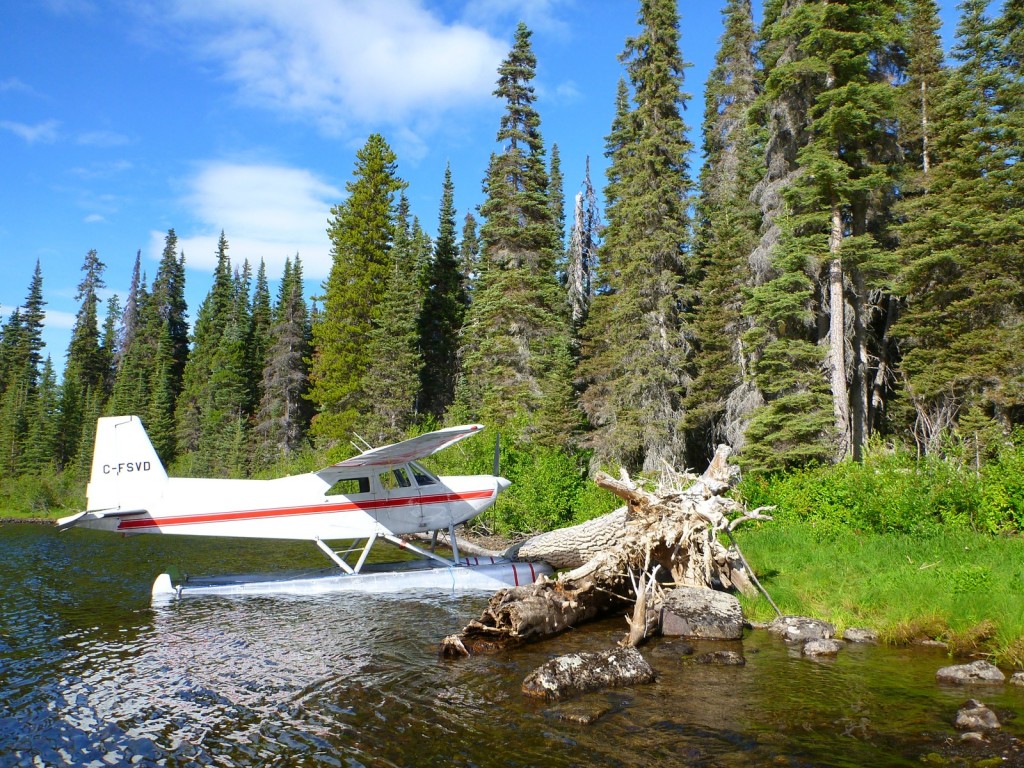 On the second day, Martin lost a steelhead in the morning and I was lucky to land my first one in the afternoon. It was relatively small but nevertheless was a beautiful fish. On the morning of day three I then had a second steelhead. This one was larger, I was exhausted after it was released and I was trembling for a while. In the afternoon, Martin lost again a steelhead and I was fortunate to catch and release my third steelhead right below the canyon. This one was even larger than the second one, thick, long, a real beauty.

Blackwell’s Dean River Lodge consists of a main building with kitchen, dining room and sitting room as well as three cabins which each accommodate two guests. In the lodge we were very well taken care off by Diana and Dana who prepared delicious meals. We also enjoyed the company of Justin Blackwell who runs the lodge.

On day four, I started with Steve above the island and fished a deeper stretch containing large boulders with a heavy sink tip T-14. After a few casts, I was lucky and could land my fourth steelhead. Martin lost another one in the morning but was very happy to land his first steelhead in the afternoon. The ban was finally broken! 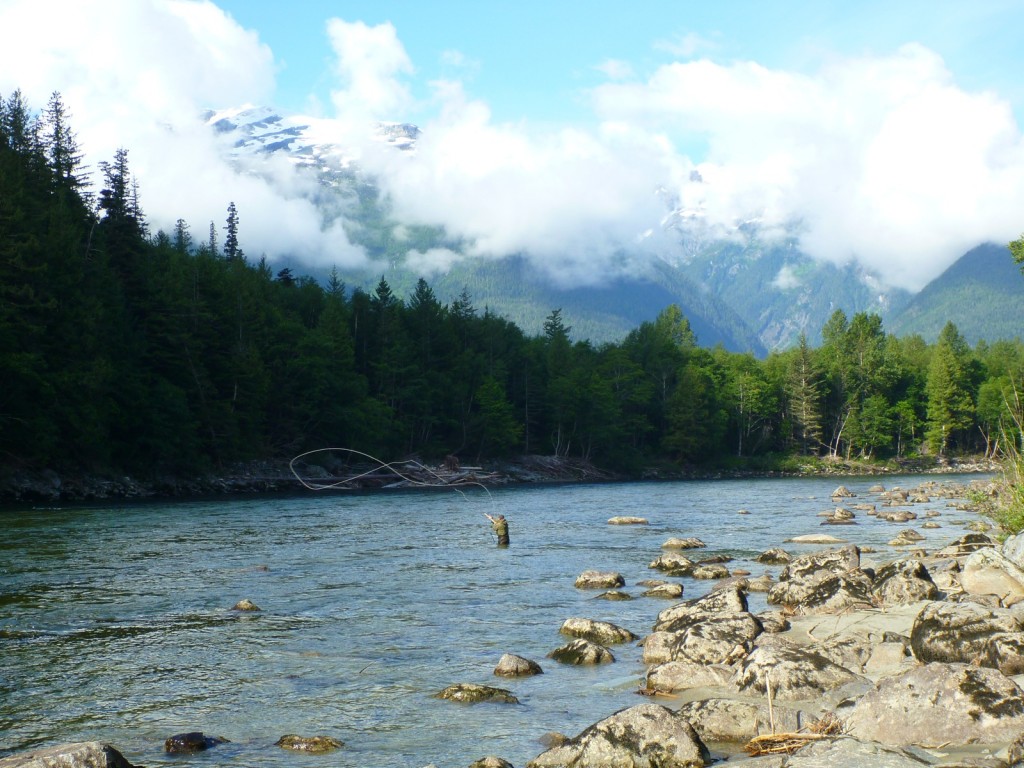 Steve showed me how to fish a waking fly - a sort of dry fly fished on the surface and creating a V-shape disturbance on the water surface - on day five. I was lucky to catch a Coho salmon on the waking fly, something that is rather unusual according to our guides. A little later, I was sight fishing for steelhead with April further downstream in bear country, unfortunately with no success.

Day six, our last day, saw Martin losing again a steelhead. I was very fortunate to catch my fifth steelhead in a riffle behind a boulder (see picture above). It was right where I had expected it to be. In the afternoon I made also the experience of loosing a steelhead after playing it for at least a minute or so.

The other three participants Steve, Ira and Tom, all experienced steelheaders, also caught their share of nice fish.

To sum up our steelhead flyfishing days, I can say that this was indeed a trip of a lifetime. Martin and I both enjoyed flyfishing for wild and fierce steelhead in stunning and unspoiled surroundings. The trip to the Lower Dean River is already an adventure. Flyfishing, flycasting, reflecting on the things that matter in life and leaving everyday life behind and just enjoying Mother Nature was an experience well worth it. Thanks to April Vokey, Steve Morrow, Justin and John Blackwell for making this happen.

One thing I have learned or rather has been confirmed during this trip is that flyfishing is neverending learning. In particular casting these Skagit heads or Spey lines with heavy sinking tips and flies is something I have to get into even more. I want to learn how to read steelhead water and present a fly to such a magnificent fish, of the right size, at the right speed, with the right tension, at the right depth. I want to become a steelheader! 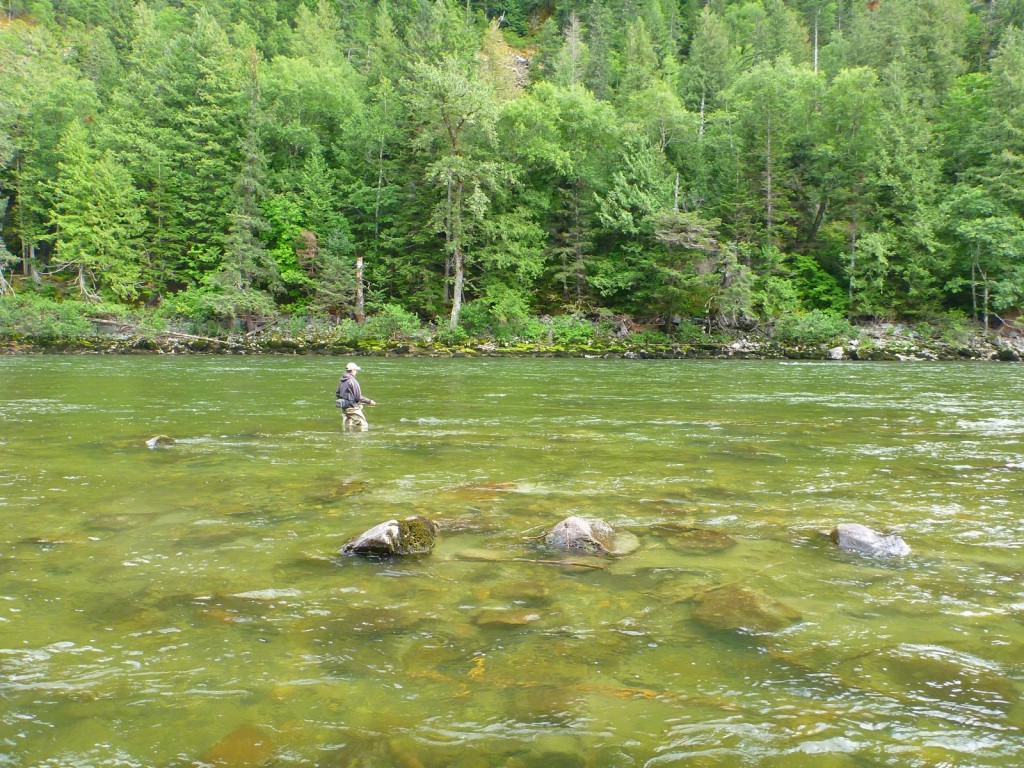 After our six days of flyfishing for Lower Dean River steelhead, we took off with our pilot and guide Charley for the next two days in our small floatplane from the Dean Channel. We flew one last time over the majestic Dean River and could see the beats that we had fished the days before.

Charley landed the floatplane on one side of Lake Sigutiat near the outflow of the lake into the River Iltasyuko, a tributary of the Dean. This River holds a nice population of rainbow trout that migrate into the river from the lake. Since downstream there are several falls that render impossible upstream steelhead migration, we were sure that the rainbows we were about to catch were not young steelhead.

We started doing a few casts into the lake and soon realized that the rainbow trout were everywhere. Charley showed us the first stretches of the river and then took off for a couple of hours. Here we were alone in flyfisherman’s paradise. We started casting our dry flies into the river and soon had some fierce rainbow trout on. They fought very well, as a matter of fact, we had never and nowhere witnessed trout fighting as strongly until released. If these wild rainbow trout and the Dean River steelhead have common ancestors, then this might be an explanation why Dean River steelhead fight so well.

We fished downstream and could rise many fish in every pool. Many were small, some of them larger and we soon found out that the largest and strongest fish held in the heavy currents. We fished halfway to the bend that was around 500 meters downstream from the lake, decided to catch two trout for our lunch and then headed back for the lake. Here we made a fire and started to cook our trout. Their flesh had the same colour as salmon. They were delicious. What tastes better than fresh trout cooked on a fire in the midst of Mother Nature?

With Charley, who had returned in the meantime, we headed again downstream and explored the beats near the bend of the river. We could see dozens of trout rising and taking frantically insects from the surface and even in the air. Indeed, we saw many large stoneflies hatch and the trout tried to catch them while in the air and flying over the water. An incredible sight! This made us flyfish with relatively large dry flies.

Unfortunately even the best flyfishing day has to come to an end and we had to continue our flight to Moose Lake Lodge where we stayed for two nights. Moose Lake Lodge is run by John Blackwell and is an Orvis endorsed lodge. We enjoyed the hospitality of John, his family and his staff very much. This was indeed flyfisherman’s paradise. 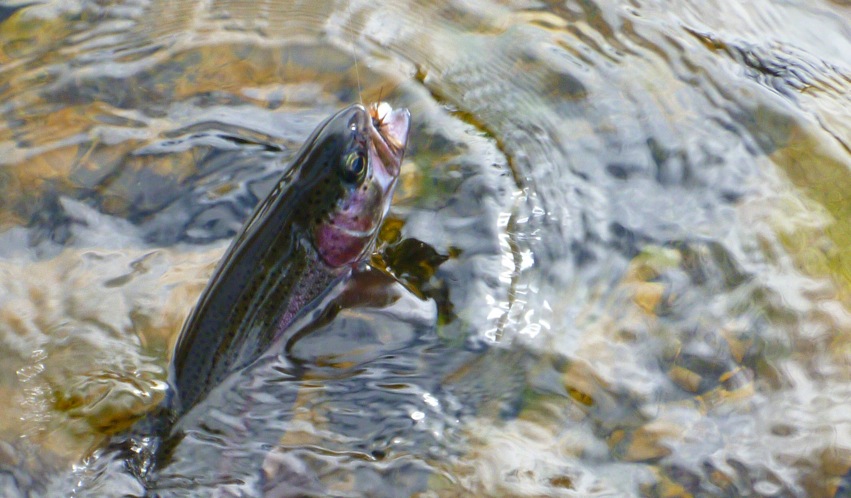 After an excellent meal and a good night’s sleep, Martin was up early to place a few casts onto Moose Lake that contains a very healthy population of large wild rainbow trout. Every cast was successful and he landed one fish after the other. Then after breakfast we took off by floatplane towards Blackwater River. In the first stretch we fished, we found hardly any fish. Moreover since it was extremely difficult to walk alongside the river, we soon switched to a more promising spot.

Here we fished near the inflow of the Blackwater River into a lake and were luck to land again one fish after the other. Here the fish were even bigger. Casting was more difficult though since fish were out very far and since a steady downstream wind forced us to do backcasting. As the day before, we decided to make a fire and have rainbow trout for lunch. Here again, the trout we ate was delicious. We also watched a bald eagle catch a fish in the lake. This was very spectacular. These eagles are huge.

After lunch we took a walk and headed through the woods to another stretch. Here we were able to catch a few trout, most of them were quite small and so we decided to head back. We fished the initial stretch a second time and could land many more wild rainbow trout. Then we decided to fly back to Moose Lake Lodge and fish Moose Lake for a while. Here we had again several large fish.

When it was time to head back to the lodge, we realized that we had lived two incredible days flyfishing the nicest wild rainbow trout that you can imagine in complete wilderness and untouched nature. British Columbia really is a place where a flyfisherman or -woman can can live his or her dream and experience fabulous adventures.

Many thanks to John Blackwell for the organization and his support. We also had a great time with Charley, our pilot and guide. We very much enjoyed the flights with him. He made us discover many British Columbia beauties. 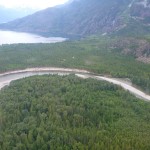 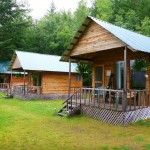 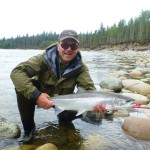 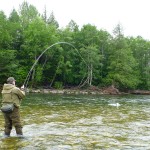 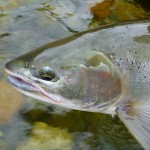 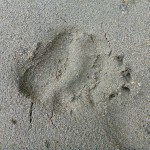 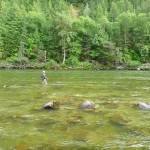 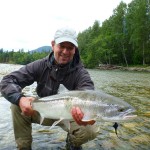 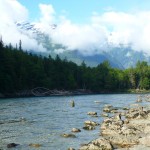 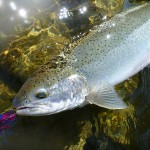 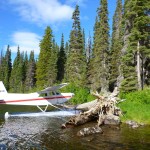 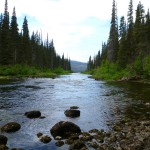 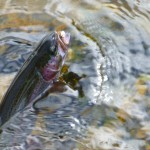 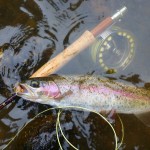 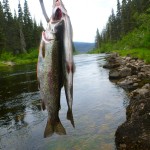 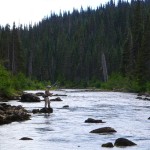 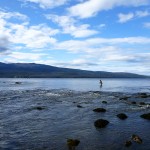 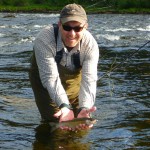 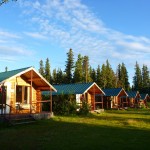 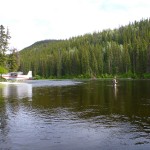 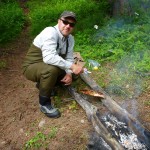 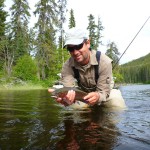 For more pictures check out the “My Albums” section of my website http://www.flyfisherjournal.com