Atlantic Salmon of the Gaspé Peninsula

I toured the Gaspé Peninsula from July 31st until August 9th 2010. In a small and counterclockwise loop around the peninsula, I travelled from Gaspé to the Forillon National Parc, Sainte-Anne-des-Monts, Parc National de la Gaspésie, Cascapedia St-Jules, New Richmond, Percé and back to Gaspé.

Many rivers of the peninsula are home to the Atlantic salmon and hence a paradise for the flyfisherman and -woman. Flyfishing was democratised only relatively recently with the introduction of the ZECs (zone d’exploitation contrôlée). Obtaining the right to fish may seem complicated to a European. The different non-private pools of the rivers - or fosses as they are called in French - are grouped together in sectors and for each sector, fishing permits are available on a day-to-day basis or on a 48 hours draw or on a draw on the 1st of November. Check out Saumon Quebec for details. There are also numerous fishing lodges/outfitters - called pourvoiries - that can make all arrangements for their guests. With a permit you are allowed to keep a maximum of 2 fish per day. Catch and release permits are also available.

The first salmon I saw were those of the Rivière Madeleine. Approximately 20 kilometers upstream of the mouth of the river, a huge waterfall of about 20 meters in height stops all salmon. Until the 1960s, they had to spawn somewhere below this fall. In the 1960s, a fish pass was installed which allowed the salmon to travel upstream under ground and reach the river above the fall. Here around 60 kilometers of additional water stretches are ahead of the fish, to the great delight of the flyfisherman. The fish are counted and put manually 4 times a day from the last basin of the pass into the river. On my visit, 944 salmon had passed up to that day this year. The yearly average is 1’000 fish - compared to an average of more than 10’000 for the River Tweed in Scotland. A dirt road of approximately 7 kilometers leads to this extraordinary sight. You can see numerous salmon below the fall, resting before pursuing their journey, and it is absolutely spectacular to watch these wild fish. The river itself above the fall is very broad and majestic and hence also offers a very spectacular view. 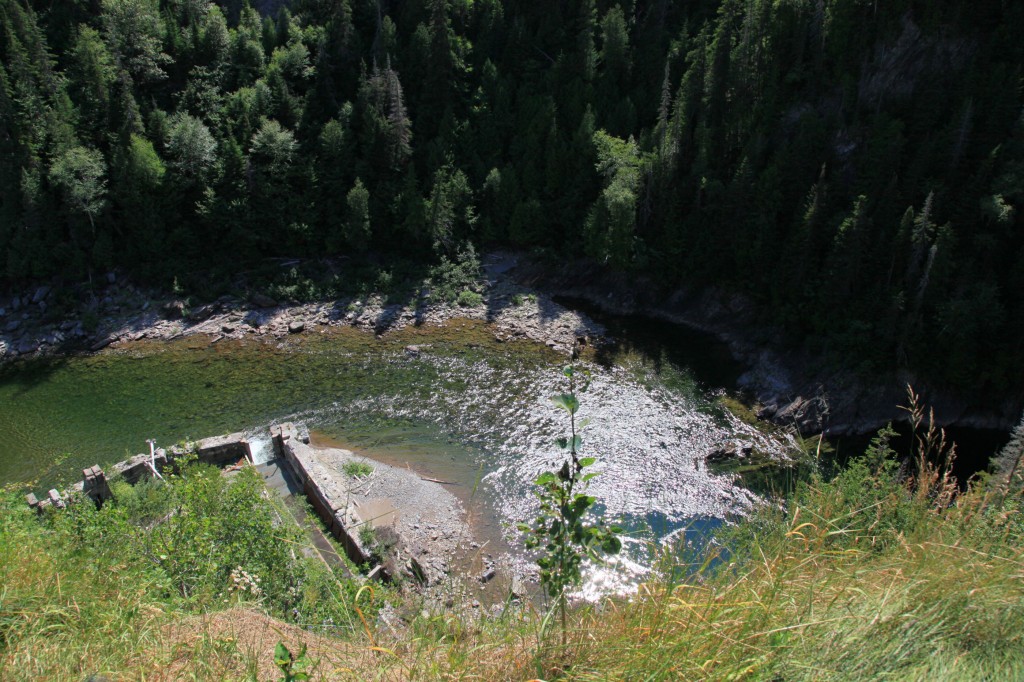 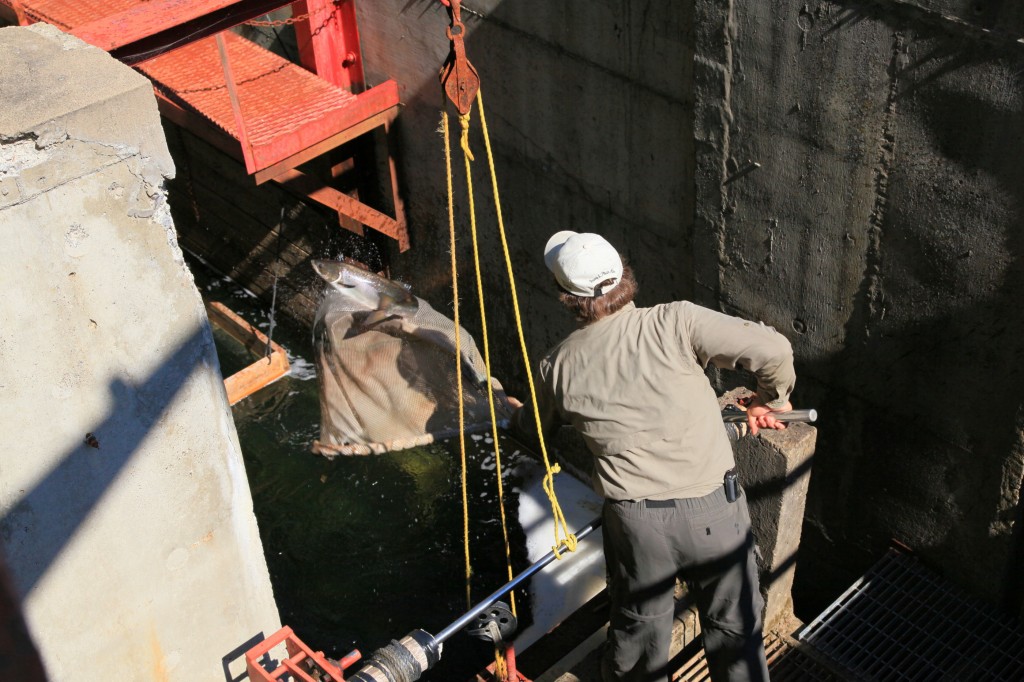 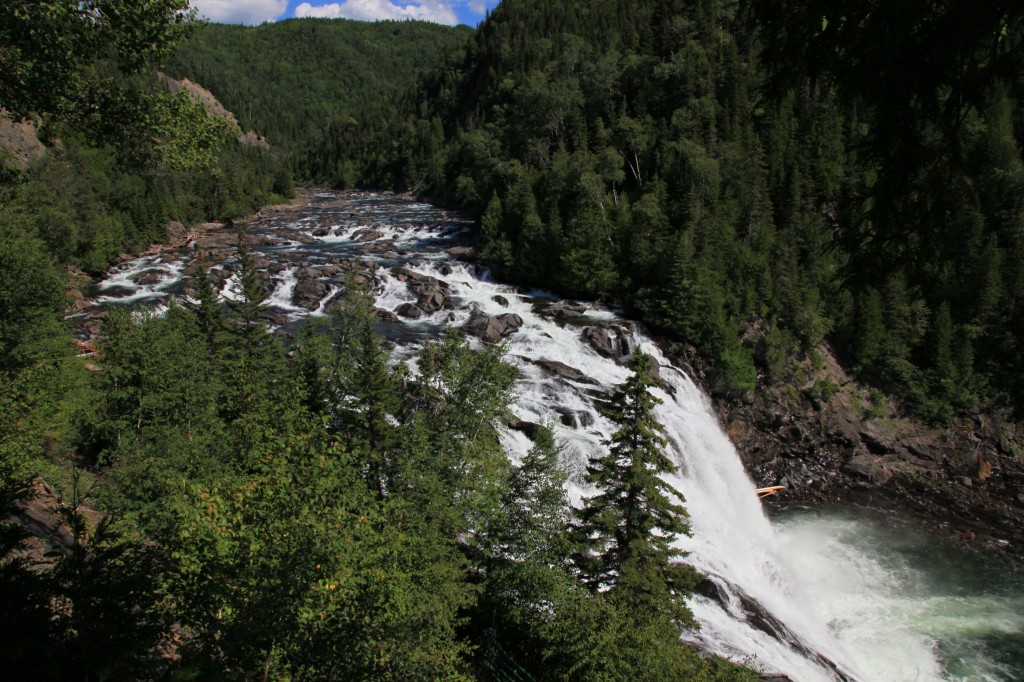 In discussions with the locals, I learned that the conditions in all Gaspé rivers had been excellent so far this year since a good amount of rain had fallen in early July. Catching reports from all rivers were excellent and numbers were up from recent years.

On the way from Sainte-Anne-des-Monts to the Parc National de la Gaspésie, I could watch three large salmon in La Grande Fosse on the Rivière Sainte-Anne.

I had booked three days of fishing with the Salmon Lodge. This lodge is beautifully located on the River Cascapedia with spectacular views onto the river. On the morning of the first day I fished the Alder Island Pool in the upper part of the river with guide Patrice. I started fishing the pool with my one-handed rod and relatively small sunken flies and felt a pull after a while. It was only at the end of the morning that a salmon came for a larger fly (Aldo Salmon, one hook) and soon after I could release my first Cascapedia and hence Gaspé salmon. In the afternoon, I fished New Derreen. Here the river is very broad and majestic and I fished my double-handed rod. Unfortunately without success. 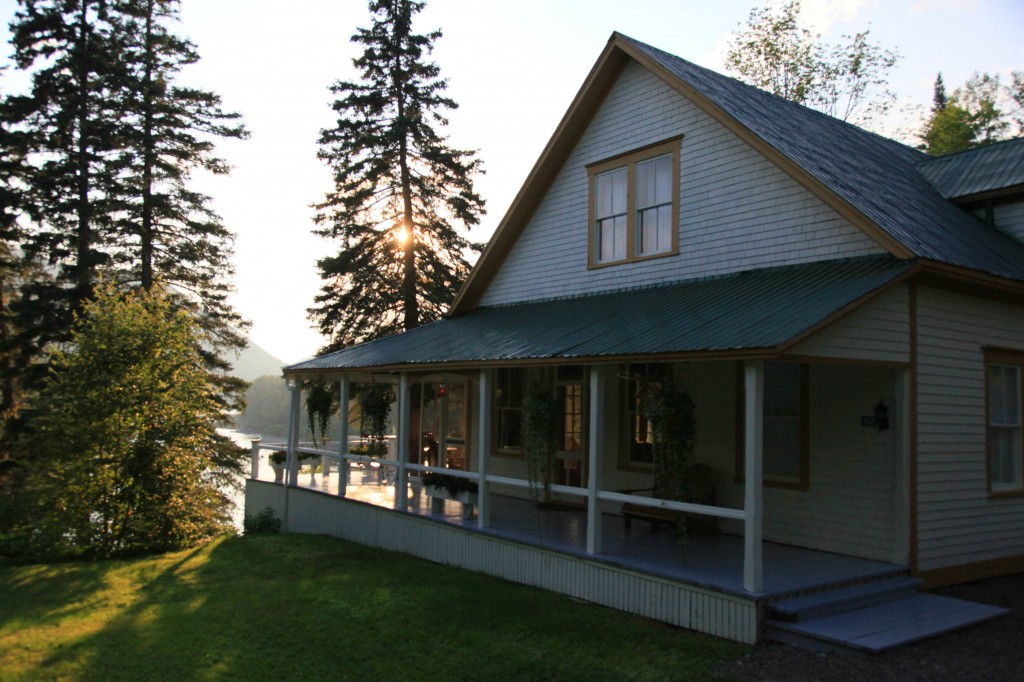 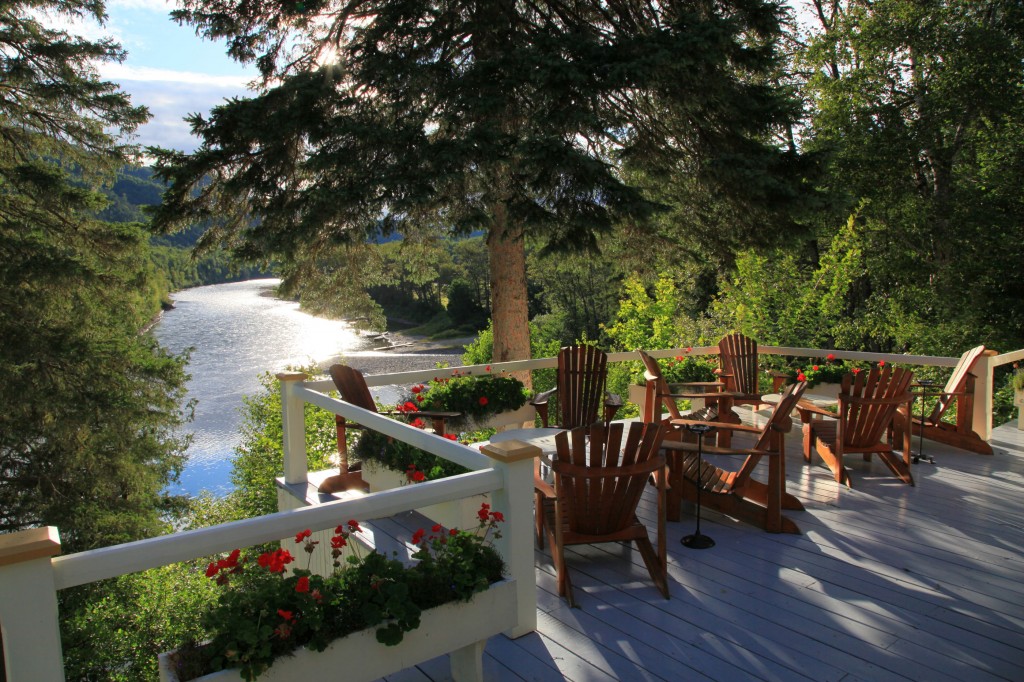 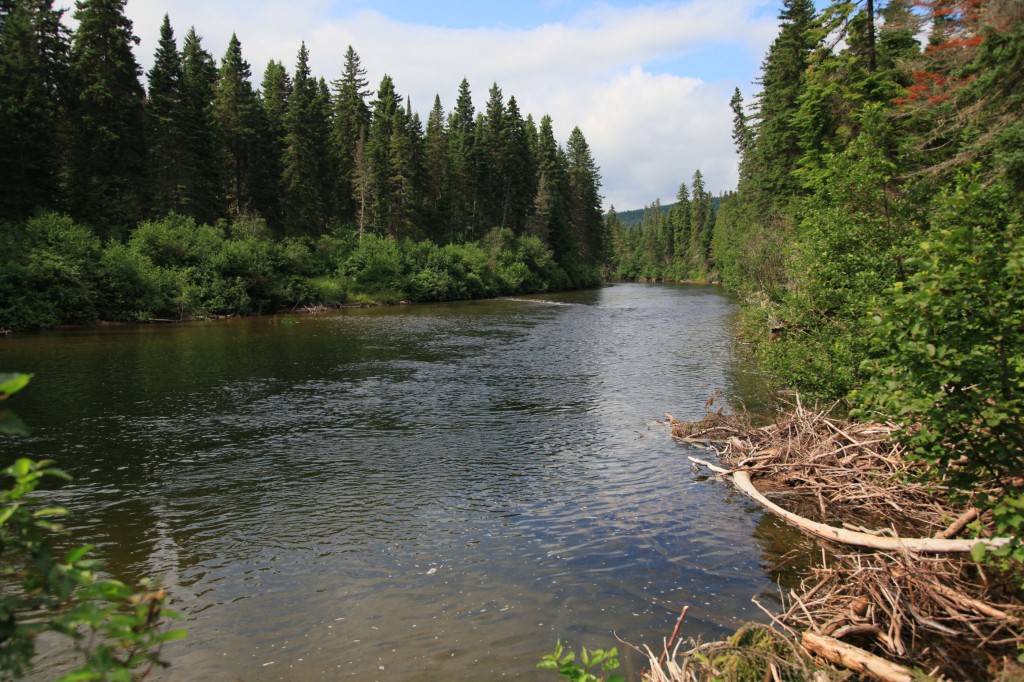 On the second day, the guide Clément took Christian, another guest from Quebec who had caught a nice grilse on the day before, and myself to the E sector of the River Bonaventure which consists of the most upstream pools that are available for fishing. Here we fished the pools Kransell, Tom Bear, La Cage and Double Crossing. We fished both sunken and dry flies. The River Bonaventure is very spectacular since its water is crystal clear and since you can see numerous salmon in the different pools. The highlight is without a doubt on sight flyfishing with dry flies.

The level of the water of the Bonaventure had gone down quite a lot during the days before and hence it became more difficult to catch fish. Although in all pools we fished, numerous fish were present, they would not take our flies. We fished the first pool with sunken flies, casting them diagonally across the river and letting them swing around. Then one makes one or two steps downstream. That way, you cover a large area of the pool. I started, Christian followed after a while. When I had finished, Clément took me upstream to a rock ledge above the water. From here we could see 3 nice salmon laying side by side and another even bigger one a little deeper in the water. Time for some dry fly action! I started casting my dry flies and was able to move one or two fish, but they would not take the fly. I tried different sizes and colours, but they simply were not interested any further. 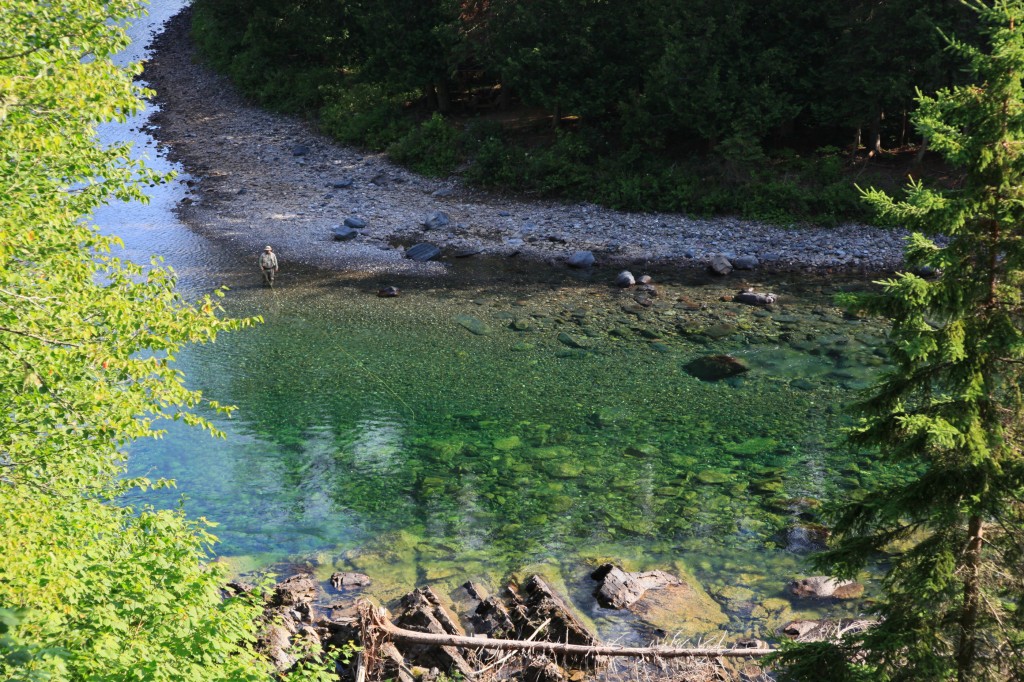 It was only late in the afternoon, when the very large pool Double Crossing was in the shade, that I was lucky. Clément had suggested another change of fly, from sunken to dry, when, on the second cast, the impossible happened. A very nice salmon took my dry fly from the surface of the water and disappeared again into the pool. I stroke immediately and realised that I had hooked my first Atlantic salmon on a dry fly. Of course, these dry flies - called bombers - are not comparable with the dry flies we use for trout fishing, they are huge and relatively heavy, hence also difficult to cast in windy conditions. Nevertheless it is great fun and exciting seeing a huge fish come up to the surface and take your fly. After a good fight, I could land and release a real beauty of a strong fish. Clément estimated it at 15 pounds. 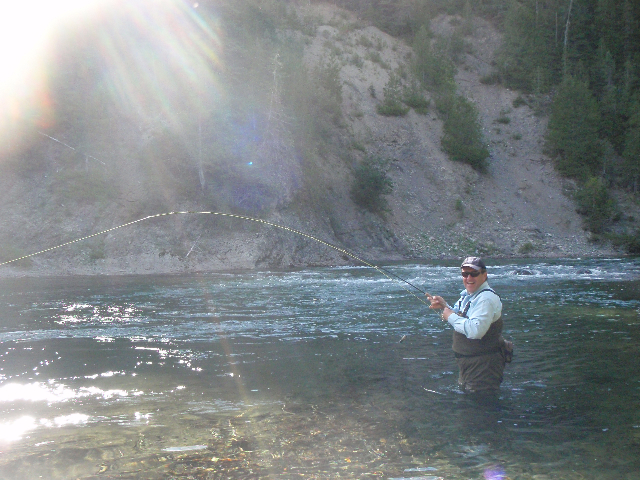 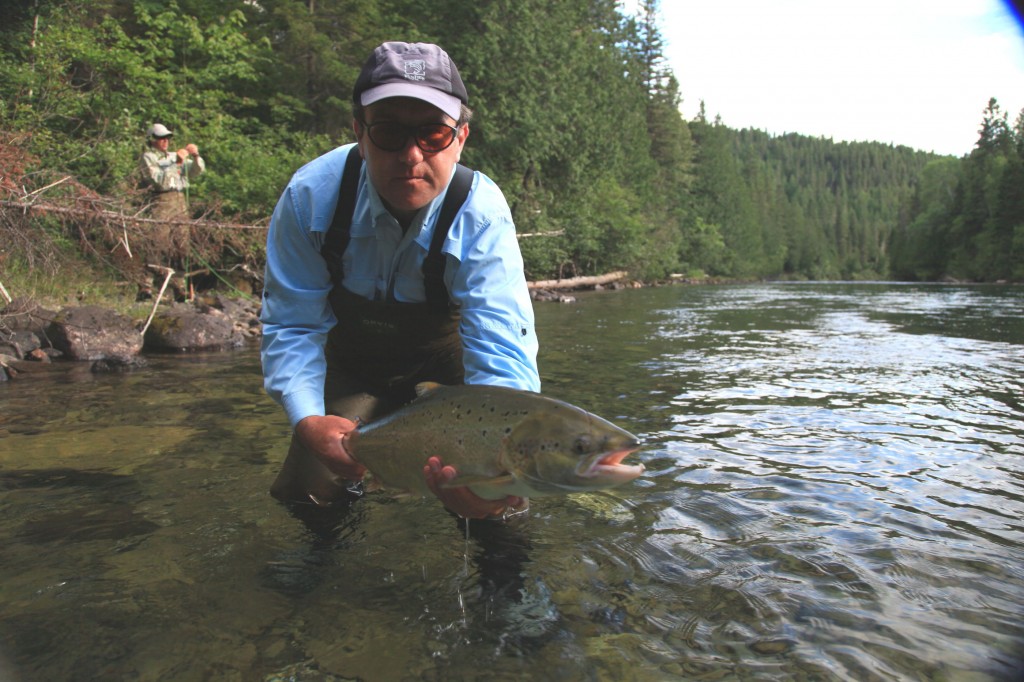 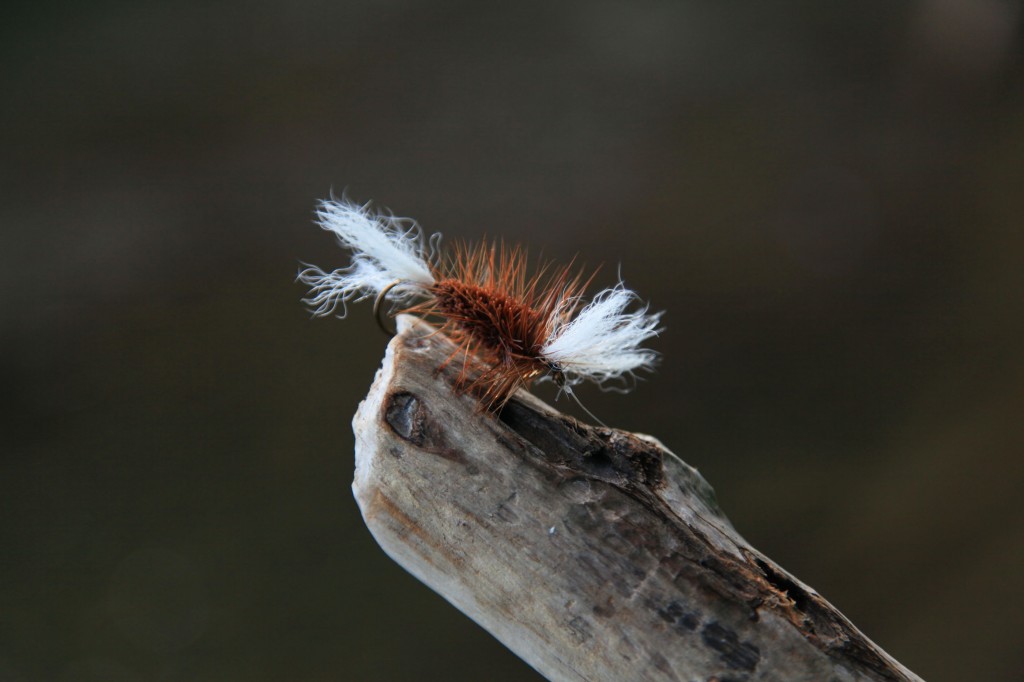 On the third day, Clément took Christian and me to the B1 sector of the Bonaventure. Here we fished as beautiful stretches as the Ruisseau Creux, Molson, Lunch, Emile’s Luck and La Longue. Unfortunately no luck for both of us on that day. Fishing becomes difficult during weekends on the lower part of the river after 10 am since many canoe and kayak float down the river. 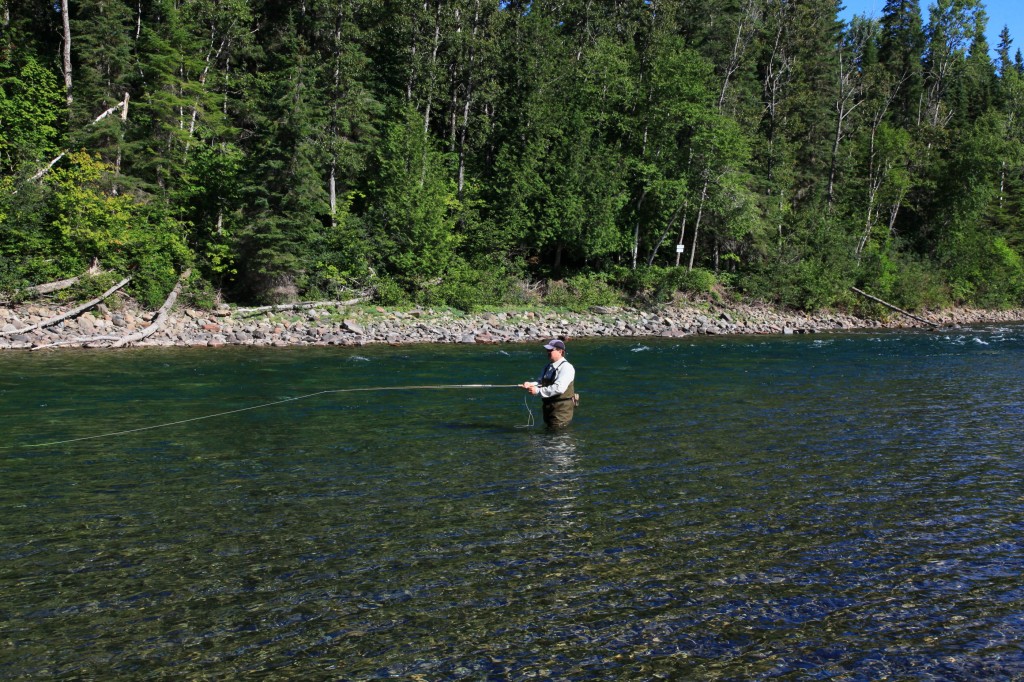 Conclusion: The Gaspé rivers are all spectacular and a paradise for the salmon flyfisherman. Although theoretically one could do all the organisation and bookings by oneself, I strongly recommend the use of a lodge or at least of one or several guides. The guides find their way through the maze of dirt roads that lead to the pools that are booked. They also know how and where to fish the pools and are always up to date about catch statistics and pools that hold fish. I personally found their services invaluable. My thanks go to the very professional and friendly manager, staff and guides of the Salmon Lodge for an unforgettable experience.

By the way, to increase chances of survival after releasing the fish, all flies with triple hooks are prohibited from this year on. Furthermore, flyfishing is the only method allowed for catching salmon on the Gaspé Peninsula. Quite remarkable in my view.

Check out the website of the Salmon Lodge. More pictures can be found in the Gaspé section of my website.